Latest data shows that the population of Manchester is 552,858.

First founded in 79 A.D. as the Roman fort of Mancuniam, Manchester became a city in 1853. The city boomed during the Industrial Revolution of the 19th century and reached a peak population of 766,311 in 1931.

Manchester’s economy slumped after the Second World War and its population fell to a low of 422,700 in 2001.

Recently, Manchester has reinvented itself as a modern urban city and has seen renewed growth at such a pace that it has begun to compete again with Birmingham for the unofficial title of the United Kingdom’s second city.

In 2017, the first mayor of Greater Manchester will be elected with wide-ranging powers. 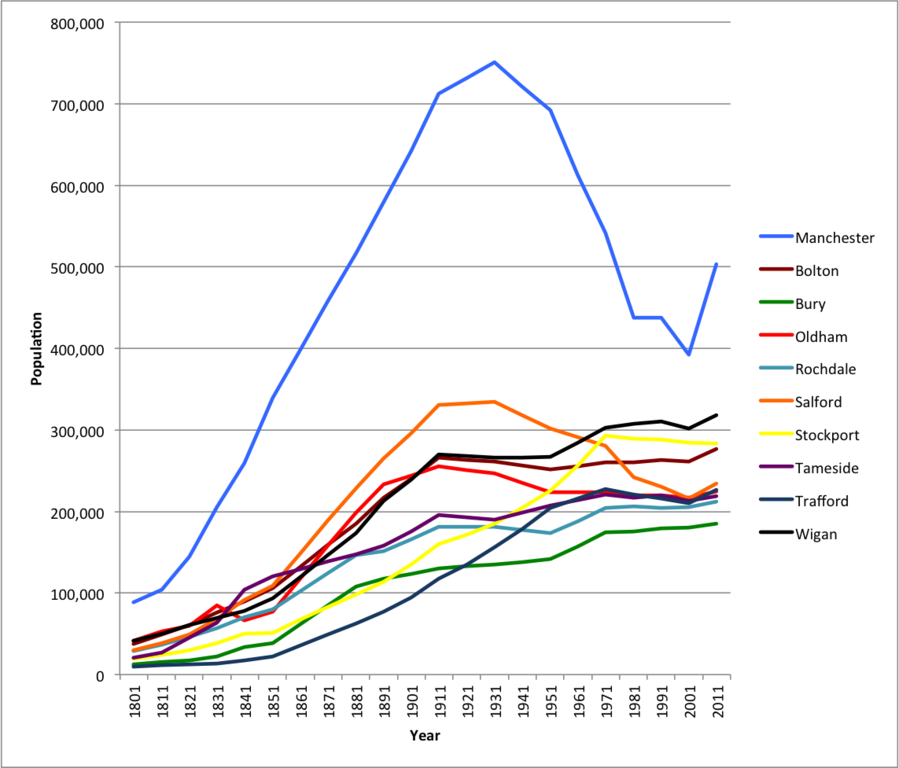 Recent years have seen a dramatic recovery in Manchester’s fortunes. Urban redevelopment and increased economic prosperity seen the population boom again. Today Manchester is one of the fastest growing urban areas in the United Kingdom.

Rapid growth has continued and over the past five years (from 2011 to 2015) the population has grown by a further 30,000. Latest data available from the Office of National Statistics (via Manchester City Council) reports that the 2015 population of Manchester was 530,292.

Data on Manchester’s 2017 population will be released in the summer of 2018.

Manchester is an ethnically diverse city. In 2011 33.3% of the population was non-white.

Language data is not available for the city of Manchester, but according to the 2011 census English is the most commonly spoken language in Greater Manchester.

A further 6.9% of people did not state their religion when asked in the 2011 census.