According to the Office of National Statistics latest estimates, the UK population is 65,110,000 people.

The United Kingdom is the 22nd largest country in the world, the fourth largest in Europe, and the third largest in the European Union by population.

The United Kingdom is one of the most densely populated countries in Europe. 671 people live in every square mile, that’s 259 people per square kilometre.

The UK population increased by more than 500,000 people in 2015. Immigration is a sensitive political topic in the UK, and was a major factor in the country’s 2016 decision to leave the European Union.

How many people live in the UK?

Although the overall UK population in 2017 is 67,081,234, the UK is made up of four different countries each of which has its own population.

The chart and table below list the 2021 population for the UK as a whole, and for England, Scotland, Wales and Northern Ireland.

If you click on a country’s name the table above, you can read more detailed article about the population of that country.

UK population growth and Immigration into the UK

Population increases come from immigration and natural growth (the number of births minus the number of deaths. The total number of immigrants coming into the UK is offset by the number of people who emigrate from the United Kingdom each year (see British people abroad below) to reach a final population growth total for the year.

About half of the people coming to the UK in 2015 were from the European Union. Recent data indicates that there are approximately 3 million EU citizens living and working in the UK. This equates to 5% of the UK population. The other half came from non-EU countries.

Immigration is a contentious topic in the UK, with many people believing that it is too high. Because of this immigration was one of the most important topics during the recent referendum about whether the UK should remain in or leave the European Union (often referred to as the Brexit referendum.

Approximately 4 million British citizens live outside of the United Kingdom. Informally, they are often referred to as British Expats.

Around a quarter (1.2 million) who were born in Britain live in other EU countries and the remaining three quarters (2.8 million) live in the rest of the world, most commonly in Commonwealth countries or the United States.

Here is a table listing the 10 most popular destinations for British expats, based on data from the UN Population Division.

Ethnic groups in the UK

The office for National statistics records data on ethnicity in each census. In 2011 it reported that the largest ethnic group in the UK was White (87.17%), followed by Asian or Asian British (6.92%) and Black (3.01%).

Most white people in Britain are descended from a number of different ethnic groups, not all of which are indigenous to the British Isles. Historical ethnic groups include Celts and pre-Celts, Normans, Romans, Norse and Anglo Saxons. This heritage reflects the history of the British Isles, which has been invaded on a number of occasions. More recently, an increasing number come from other EU states.

The black population in Britain has roots going back to the 15th and 16th centuries. However, the majority of black immigration into the United Kingdom came in two distinct waves during the second half of the 20th century. The first wave was in the 1940s 50s and 60s from the Caribbean (for example, Jamaica) as a part of a policy to deal with Britain’s labour shortage. Since the 1980s, immigration from Africa has been higher than immigration from the Caribbean.

The British Asian population also has a long history which began in the 17th century. But, immigration from Asia in significant numbers began only in the second half of the 20th century. Manual workers and medical staff including doctors were recruited from Pakistan and India in the 1950s and 1960s. Many of the Asian people who were expelled from Uganda by Idi Amin in 1972 also emigrated to the UK.

Religion in the UK

Other religions were reported by 0.42% of the population, who were asked to write down the name of their religion. The most common response was Jedi Knight, which was written down by 177,000 people. The next most common responses were Pagan (57,000) and Spiritualist (39,000).

Christian churches in the UK

Recent data on the membership of different Christian churches within the UK is hard to find.

One survey carried out in 2008 reported that the Catholic Church was the largest in the UK with a membership of 1.6 million, followed closely by the Anglican Church (Church of England) with 1.44 million members.

Other Christian denominations in the UK with a significant membership were Presbyterian with 0.8 million members and the Orthodox churches with 0.4 million members.

The Church of England and other Anglican churches

The Church of England was established in 1534 when English King Henry VIII broke from the Catholic Church in Rome. Although theologians had been debating some kind of split for some time, Henry VIII’s decision was primarily a pragmatic one. Because the Pope in Rome would not annul his marriage to Catherine of Aragon, which would have allowed him to marry Anne Boleyn, the simplest solution open to him was to create a new church which he controlled.

The monarch of England (currently Queen Elizabeth II) is head of the Church of England even today. Additionally, the 26 most senior bishops have seats in the House of Lords and can therefore directly influence UK law.

Languages in the UK

English is most commonly spoken language in the UK, and is the UK’s de-facto official language.

Here is a table from the ONS which lists the most commonly spoken first languages in the UK in 2011.

Note: Indigenous languages such as Welsh and Scots do not feature on this list as they were more commonly reported as second languages.

It is important to recognise that, because of patterns of immigration, the percentage of people speaking different languages varies across the country. As this chart from the ONS shows, the proportion of people in London whose first language is not English is far higher (around 20%) in London than it is in the rest of the country.

Languages indigenous to the British Isles

In England and Wales, English is spoken as the main language by 49 million people (92%). The number of people who speak English, even if it is not their first language, is higher at 98%. In Scotland, the number of people reporting that they could speak, read and write English was 94%.

There are also a number of extinct languages, including Pictish, Old and Middle English, Old Norse and Anglo-Norman.

Immigration into the UK, particularly in the 20th and 21st centuries, has brought a number of new languages into the UK – notably from Asia and Europe.

According to the 2011 census, the most commonly spoken non-indigenous language in the UK was Polish, with 546,000 native speakers in England and Wales – approximately 1% of the population.

The funding and administration of education in the UK is split between the national government and local government.

In 2015 the UK spent £89.4 billion on education funding – £43.8 billion came from the central government and the remaining £45.6 billion from local government funding.

In England, education is overseen by the Secretary of State for Education and the Department of Education, which sets national standards for education in schools (known as the National Curriculum).

Each child is expected to begin school at the beginning of the term after the child’s fifth birthday (fourth birthday in Northern Ireland).

Traditionally, compulsory schooling in the UK has extended until students are 16 years old. A recent change in the law means that, in England, anyone aged 16-18 is also now required to either stay in full time education, stay in part time education while working or volunteering for more than 20 hours per week, or begin an apprenticeship / traineeship.

The UK has a strong and internationally renowned university sector, including famous historical universities such as Oxford and Cambridge.

The Government does not record official statistics on literacy rate in the UK.

A recent study by the OECD reported that the UK had the lowest literacy rate of any developed nation. It reported that around 20% of English 16-19 year olds have low literacy skills.

This is backed up by a report from the UK’s Literacy Trust, which explains that 16% of adults in England are “functionally illiterate”. This means that their literacy is below what is expected of the average 11 year old.

Population density in the UK

As you can see from the table below, England is at least three times more densely populated than any of the UK’s other three countries, with a population density of 413 people per square mile in 2013, followed by Wales, Northern Ireland and Scotland.

Here is a table listing the most densely populated cities or urban areas in England, all of which are in the South East.

Largest cities in the UK

For more detail on life expectancy in different UK countries, see the table below:

Life expectancy varies considerably at local level as well, and tends to be higher in the South of England than in the North.

Boys born in Glasgow during the same period could expect an even shorter life – 73.4 years on average.

The population of the UK is ageing.

Birth rate in the UK has fallen by more than a third since the 1960s. 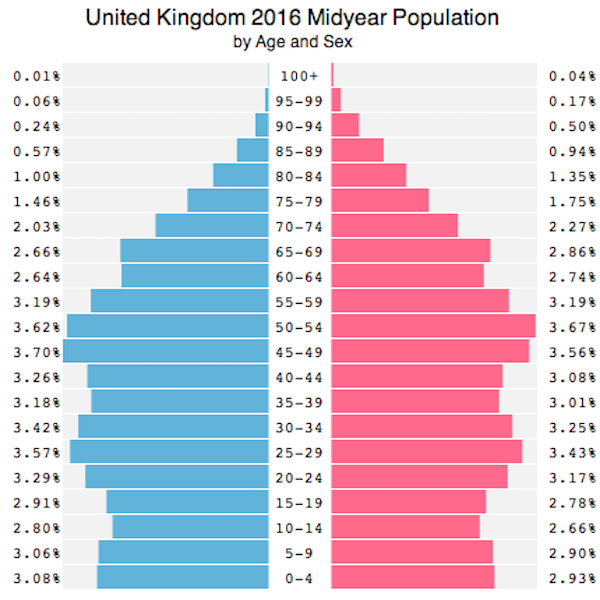 Also visible is a bulge of people in their late forties and early fifties – the UK’s baby boomer generation.

And, finally, at the bottom of the pyramid we can see the effects of a dip in the UK’s birth rate during the early 21st century, followed by an boost in recent years.